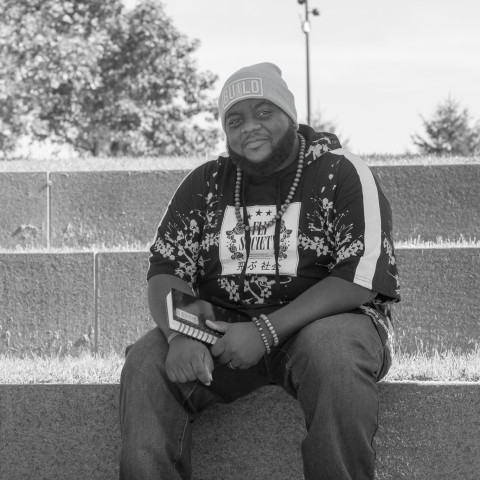 Artist Statement: In this poem, Kenny pictures a world where black folk can thrive and be their whole selves all of the time. What the world would look like for black people without the boot of white supremacy striving to choke out all hope for a world of equity and freedom.

Imagine not having to wage war on poverty

Because workers were paid properly

A living wage with more life in our days

Where blacks, didn’t have to beg for scraps

Positioned below a table we were never invited to

Praying for food to fall off plates

Not designed for us to eat from

To be placed inside. But instead force fed empty promises

To fill up on “not nows” and “just waits”

It would be normal not to see white bread as optimal

With the crust cut off. So as to save that bleached flour

Imagine a world with wheat, pumpernickel, and rye

America with no choice but to swallow this dark bread

With grains as coarse as the natural hair, many

Ask to touch. An example of how Nature’s Best

Isn’t white bred. No longer would we have to Wonder

How much of ourselves we could be

Leave our white voice laying dead in the streets

The freedom to use “ain’t”, “finna”, and “lit” during meetings

Stringing together words and phrases only we know

Chad would ask where the money resides

We say nothing or hint with coy replies

Imagine the arrogance, to look our counterparts

In the eye. Say we ain’t come here, but

We sure ain’t leaving

Because there is nobody to sell out to

As we wipe away the blemishes of supremacy

How would it feel to be finally free

The long awaited fulfillment to an ancient prophecy

No longer in Hell, we can breathe out now

Don’t mine me, I’m just dreaming out loud

Show Some Love Thanks! 8

Kenneth L. Woods is a poet, writer, author, storyteller, content creator, fun-loving father, and husband. He has shared his spoken word poetry with intimate crowds to auditoriums of over 3,000. His artistry has spanned from the U.S to Greece and France through non-profit sector and corporate collaborations.

The Hawaii native is no stranger to the stage or page. A decade of pencil to paper, reciting poetry, challenging thought patterns, and pointing people towards their purpose, has developed not only Kenny Fresh’s performance-art but Refresherpoint’s conceptual design. Refresherpoint offers patrons opportunities to engage with writing services and spoken word poetry through workshops, performances, and consultations.

Refresherpoint LLC is a spoken word brand that reaches beyond cultural and societal barriers to simply provide another fresh lens to see the world and ourselves. Kenneth utilizes the power of words to refresh perspectives about navigating our individual journeys with collective hope.

As an Indiana University graduate with a Bachelor of Science in biology and an Associate degree in chemistry his love for science and poetry actualized provides a distinctive performance-art experience. His prose is a compilation of humor and satire intertwined with faith.

Previous Kayla Morgan
Show All
Up Next Kristie Powe